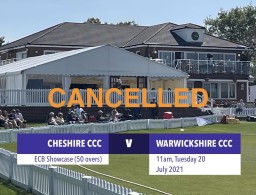 We're sorry to anounce that despite the best efforts of both sides, our ECB Showcase match v Warwickshire, scheduled for Tuesday 20 July at Chester Boughton Hall CC has been cancelled.

Following discussions between the two counties, Warwickshire issued the below statement.

Warwickshire County Cricket Club has confirmed that its one-day fixture versus Cheshire at Boughton Hall has been cancelled.

Paul Farbrace, Director of Cricket at Warwickshire CCC, said: “We’ve got an incredibly high number of absences within the men’s squad at present, due to injuries and international selections, so we plan to use this year’s Royal London Cup as a development opportunity for our younger players.

“Having discussed this with Cheshire and given the current COVID environment, which is impacting the whole of the county game, we have both agreed to cancel next week’s fixture.

“We’re very grateful to everyone at Cheshire for their support with this and wish them the very best in the remainder of the National Counties season.”